“It is eternity now; I am in the midst of it. It is about me in the sunshine; I am in it, as the butterfly in the light-laden air. Nothing has to come; it is now. Now is eternity; now is immortal life.”
~ Richard Jefferies 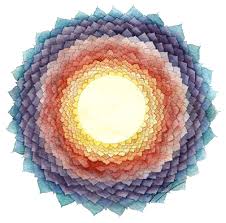 Sahasrara, the light chakra, located at the crown of the head or a little way above it. Multi-colored. As the crown chakra, it deals with pure cosmic energy. Often referred as a thousand-petaled lotus flower, it is said to be the most subtle chakra in the system, relating to pure consciousness, and it is from this chakra that all the others emanate.

When a yogi is able to raise his or her Kundalini, the energy of consciousness, up to this point, the state of Samādhi (oneness with God) is experienced.

LAYER
As stated, it is from this chakra that all others emanate. Sahasrara can be blocked by earthly attachments. Attachments that may support the illusion of separation, as the direct influence of Ajna  (see Ajna blog). The crown chakra symbolizes detachment from (or rising above) illusion; an essential element in obtaining a higher consciousness of the truth that one is all and all is one. To meditate on the attachments that we may have and let them flow down a river, so that we can let the cosmic energy flow through ourselves. Surrendering.
But… Why would I choose to live my life according to a cosmic consciousness, when most things I do, and most things I love are in the material plane?

Good question, isn’t it? Intimate one for myself. A question I will get in the next couple of days…

“Spiritual liberation is not at all a mere affair of the intellect, but rather the realization of the inmost Self, the inward vision of the soul, and the transcendence of the personality.” —Yogi