As we go up in this chakral journey, we have come now to the sixth vortex of energy, the third eye chakra. Also known, in the language of Sanskrit, as Ajna. 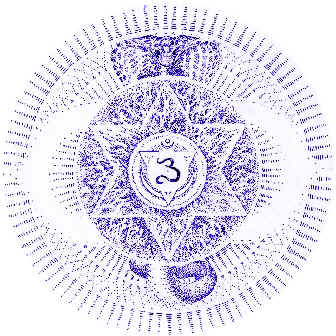 Located at the center of the brain, directly behind the eyebrow center, its activation is through the center of the forehead, the third eye. Ajna is considered as the eye of intuition. Of purple vibration. When something is seen in the mind’s eye, or in a dream, it is being ‘seen’ through Ajna. The mind, with its’ great capacity is creating a bridge, allowing a connection between the realms of waking consciousness and Spirit.

LAYER
Ajna deals with insight and it’s said to be blocked in part by the greatest illusion of separation (Maya). The things you think are separate and different are actually one and the same. Like human kind. We live as if divided. As individuals we are constantly struggling to protect our individual identities, but truth is that in the realm of energy and spirit, we are the reflection of a greater reality where everything is connected. That’s how we end up projecting ourselves into other peoples lives.

When the human beings from the Blue Planet began to die from cold, they realized Fire was no longer burning as their natural primal force. One by one they began to succumb, not from a normal cold, as they weren’t shivering, but feeling their insides crystallizing… It was like falling into a strange deep dream.

A humming chant to water came intuitively from the vocal chords of Mama Owl, an old wise woman, waking every single soul of the planet to a new reality. They weren’t dead, but transformed with light bodies. As the chant emerged stronger, their reality became an alternate one, in which Water was now their Fire, burning brightly. And the separation of the elements was now understood to be an illusion. After dying to their old ways and been brought back to Life, their perception and intuition expanded and they realized that they were all a part of the same whole.

Mama Owl knew that the apparent manner of death was in fact a liberation into a new reality, and certainly it was only after they “died” (to their old reality) that they could finally see in their minds how connected everything was. They were now purified & refined. This old humble woman saw and knew the truth. She had the ability to navigate through the darkest night and bring back nourishment for the entire planet. When everything was “dark & lost”, her owl essence guide their souls back to a new path of union and wisdom.

“There is in all visible things…a hidden wholeness. You must always be prepared to leave one reality for a greater one.”